SHARING AND CARING IN OUR COMMUNITY 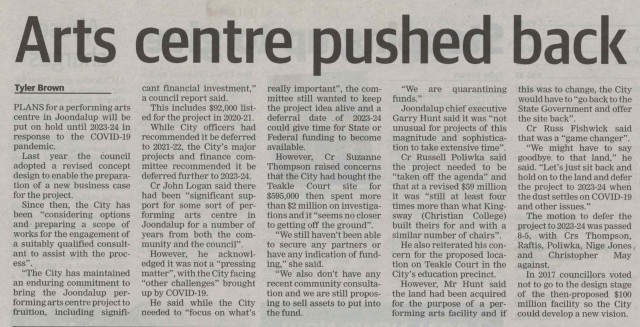 City of Joondalup to roll out more defibrillators

DEFIBRILLATORS will be installed outside more community facilities in Perth’s north to help save more lives in emergencies.

The City of Joondalup plans to install another 27 automated external defibrillators (AED) at 21 of its facilities over the next two years.

The portable, battery-operated electronic devices can diagnose potentially life-threatening cardiac arrhythmias when connected to patients and treat them through defibrillation.

A March council report said there were 115 AEDs registered with St John within the City but only 25 were publicly available 24 hours a day, seven days a week by calling 000 for a pin code in an emergency.

Councillors supported the recommendation to roll out more of the devices, which would cost $68,500, and Cr John Logan’s additional request that it consider allocating funds to install more at other facilities in future budgets.

Once installed, all units will be registered on the St John Ambulance community first responder program, which aims to connect AEDs to cardiac arrest victims prior to the arrival of an ambulance.

As part of the program, St John maintains the ‘First Responder’ app which includes a map of all publicly accessible AEDs that have been registered in WA and contact details for the AED owner.

Joondalup Mayor Albert Jacob said the City had consulted with other local governments who had undertaken similar AED rollouts and their feedback was that the units had been widely welcomed by their community and community groups.

“Data shows that for every minute someone is in cardiac shock, their chance of survival reduces by 10 to 12 per cent,” he said.

“The use of an AED during a cardiac incident has been shown to improve that outcome.

“While council makes many important decisions, it is not often we are charged with making a decision that has the potential to save a life – or lives.” 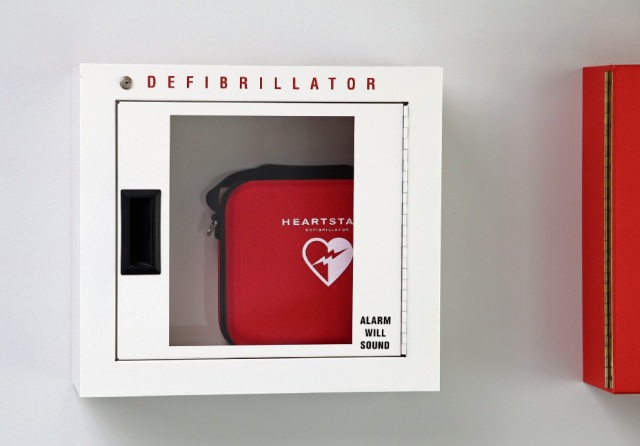 The second stage is planned for 2021-22 at another 12 facilities, including Beaumaris Community Centre in Ocean Reef, Flinders Park Community Hall and Whitford Senior Citizens Centre in Hillarys, Ellersdale Park Clubrooms in Warwick, Sorrento Community Hall, and Calectasia Hall in Greenwood. 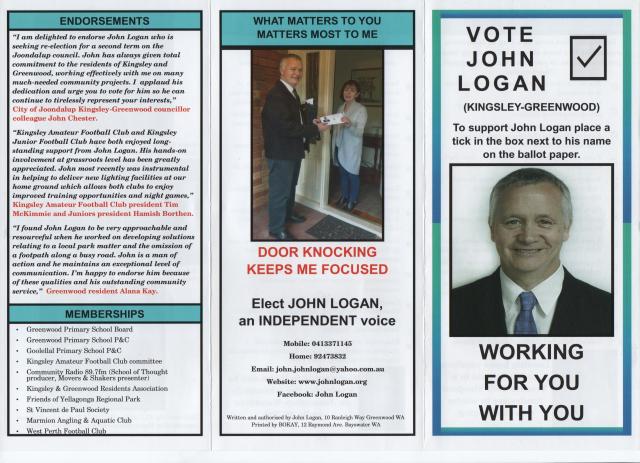 Check out the redeveloped Parin Park in Greenwood, the start of the first dedicated City of Joondalup heritage precinct. If re-elected as a local councillor, I’ll continue working to complete the heritage precinct, acknowledging European and indigenous forefathers, while upgrading local parks and providing a unique Lake Goollelal heritage trail.

If re-elected to continue to represent you as a City of Joondalup councillor in the South East Ward (Kingsley-Greenwood), I aim to see that defibrillators are available at the City’s key community facilities.

In the lead-up to the Joondalup council elections, I’m sending you snippets about what I’ve been working on as your local councillor and as a volunteer for many groups.
My achievements would not have been possible without community support.
When you receive your ballot papers in the mail shortly, I ask you to re-elect me for another four-year term on the Joondalup council.
Whether you’re a ratepayer or renter if you’re on the electoral role you’re eligible to vote, as are the owners of businesses in our community who employ the vast majority of local working people.
I’M COUNTING ON YOUR VOTE TO CONTINUE TO BE A VOICE FOR YOU ON THE COUNCIL.

Penistone Park has been transformed from an ordinary City of Joondalup asset to one of the most modern, functional parks in the northern suburbs. Football, cricket, lacrosse, softball/baseball, tennis, little athletics and many other sports groups are benefiting from the Penistone Park upgrade. The feedback has also been positive from passive recreational users. But the children’s playground needs shade in summer…..which I will deliver in the form of shade sails if re-elected to the Joondalup council.

After being approached by local residents to look at ways to improve George Sears Park in Greenwood, the City of Joondalup has now completed upgrades to this beautiful local park.

Thank you to all of those living nearby who instigated this initiative – the final product is a great recreational and environmental improvement to this unique reserve.

Our latest lighting upgrade project is now complete and operational – at Kingsley Oval.

I want to thank the Kingsley Football Club for putting on a great day last Saturday – and for their support for this project which will enable people from across our community to better utilise this popular local oval. 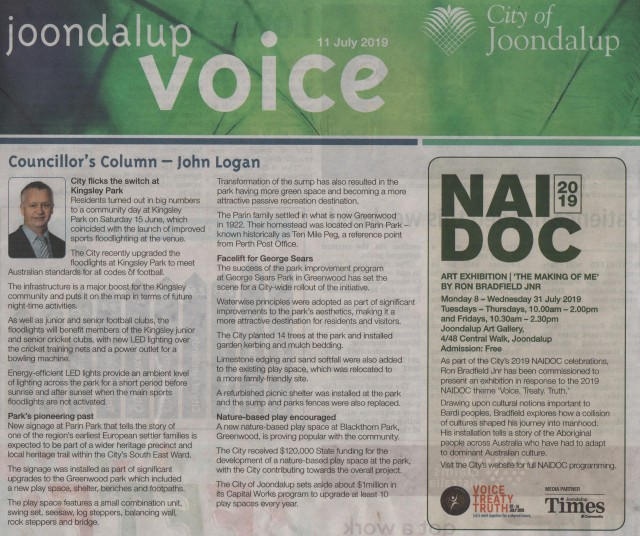 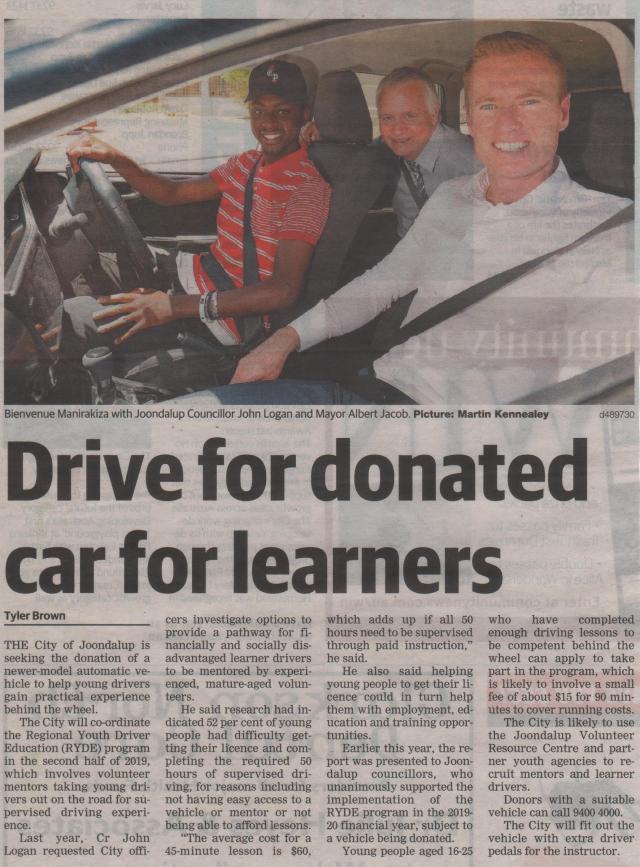 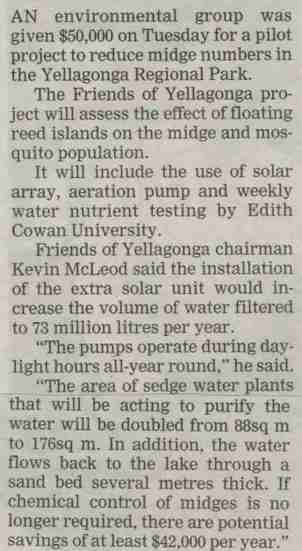 John Logan speaks to Tracey Roberts, Wanneroo Mayor and WA Local Government Association deputy president, about knowing your local council and what they do. (Movers and Shakers program on 89.7fm 09/08/2017) 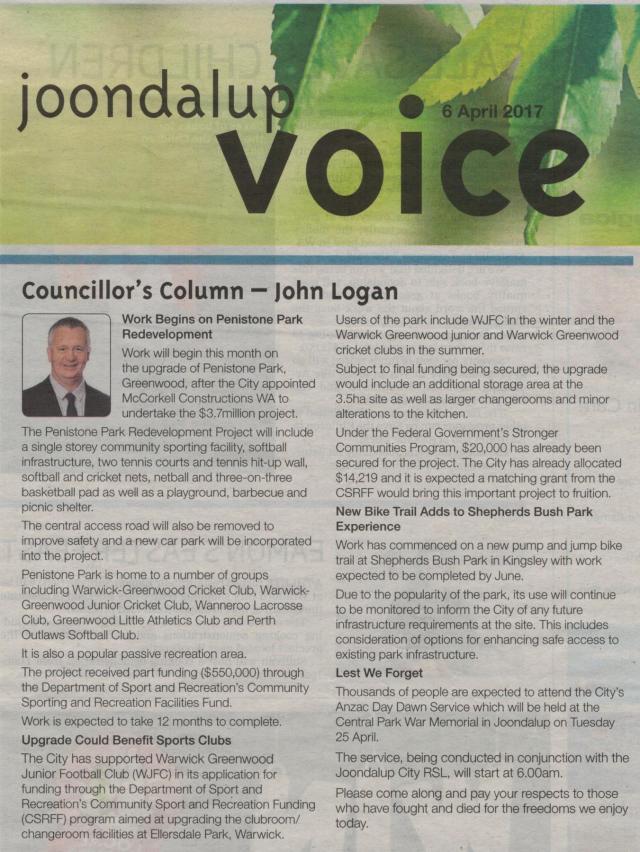 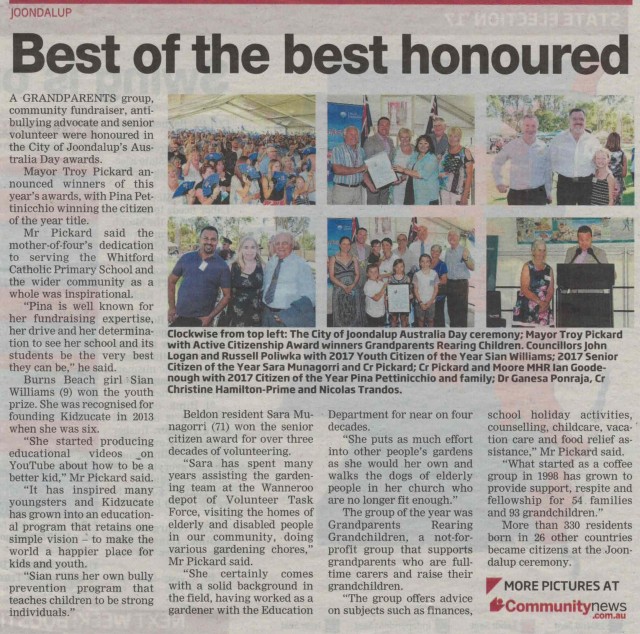 The City of Joondalup has stepped up its participation in the “Please Slow Down, Consider Our Kids” bin sticker program. This follows John Logan and fellow Kingsley-Greenwood councillor John Chester promoting the program’s safety benefits with local schools in 2015. 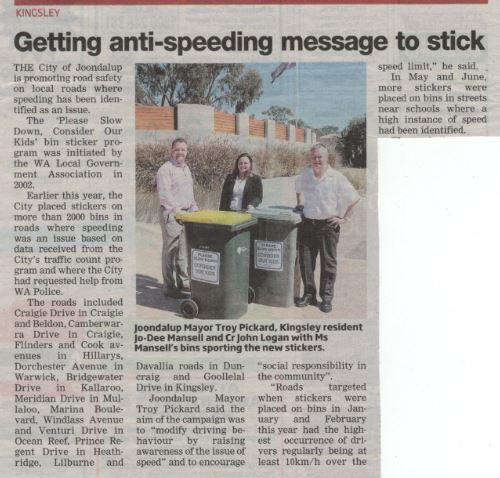 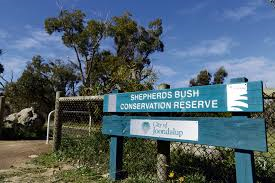 An interview from community radio Movers and Shakers show, hosted by John Logan and Clive Haddow. Steve Marmion, economic advisor for the City of Joondalup, talks to Clive Haddow about The Link – a strategic collaboration between the City of Joondalup and Edith Cowan University committed to developing strong relationships with industry, academia, local, state and federal government to enable business growth.

A young self-funded retiree (I’m 56), I was elected to the Joondalup council last October. I put up my hand to be a councillor in a bid to build a better City of Joondalup community, including caring for people less fortunate than me, people like the homeless. I encourage other community leaders, including councillors and State and Federal MPs, to consider participating in the Sleepout. (23/06/2016)

Local councillors join local MP in fight against crime by inviting all Kingsley, Greenwood and Warwick residents to a community police forum. 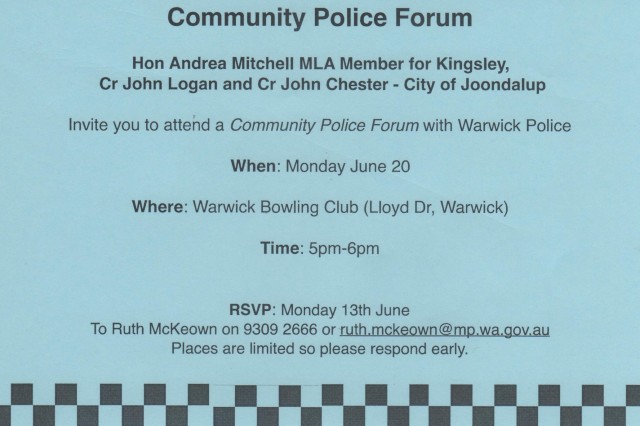 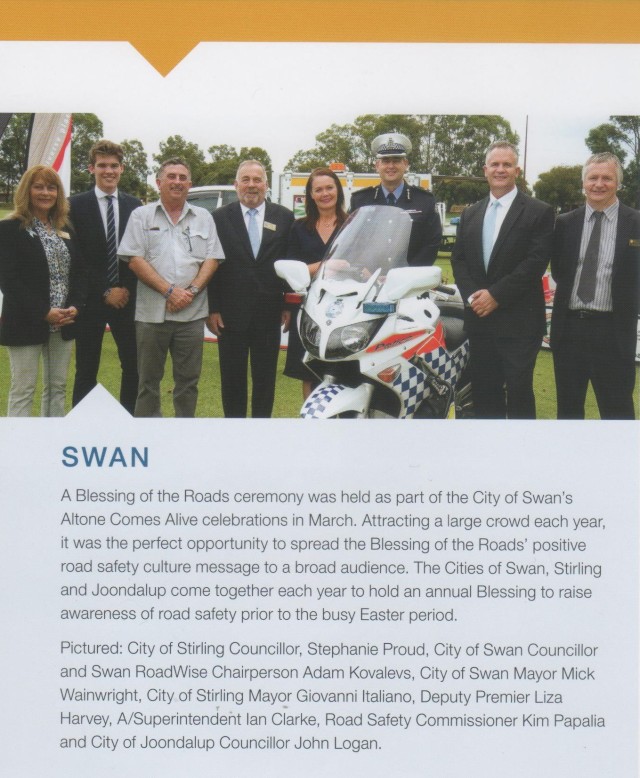 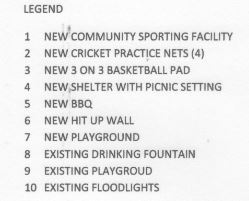 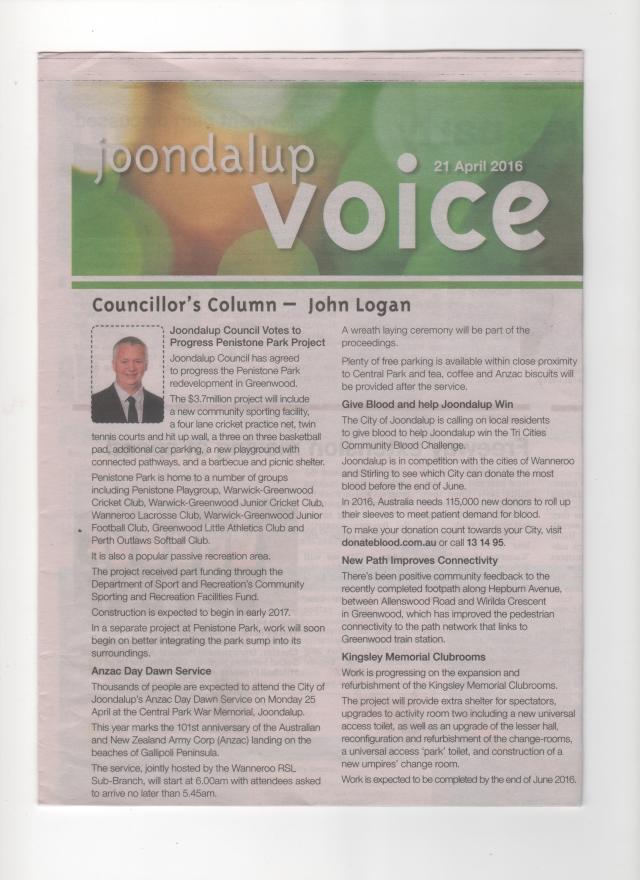 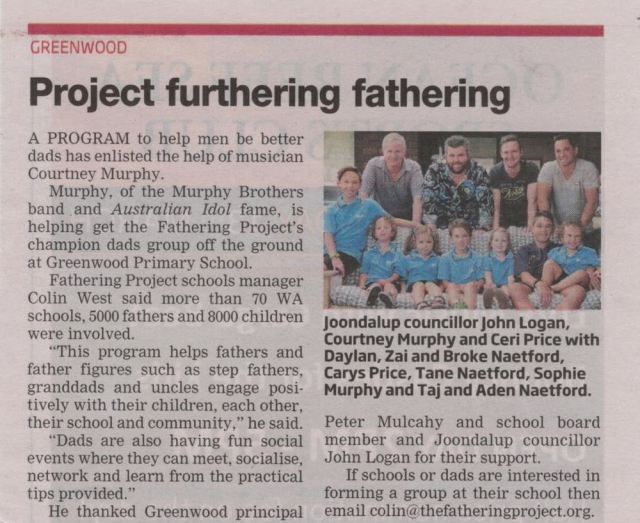 It was a beautiful morning at Central Park, Joondalup, for the 2016 Australia Day Citizenship Ceremony. About 350 people took the oath as new citizens and a number of awards were presented to outstanding residents for their selfless contribution to the community. 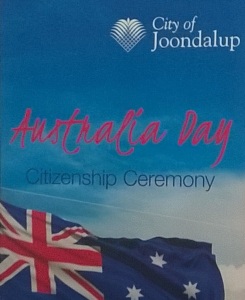 Australia Day in the City of Joondalup.

John congratulates the under-25 local citizen of the year, Elodie Prinsloo, 20.

Greenwood’s Colleen Burgess with the award she won for outstanding community contribution as a local citizen.

Greenwood’s Courtney Murphy, on keyboard, with his brothers Chris and Kieran entertaining the crowd. 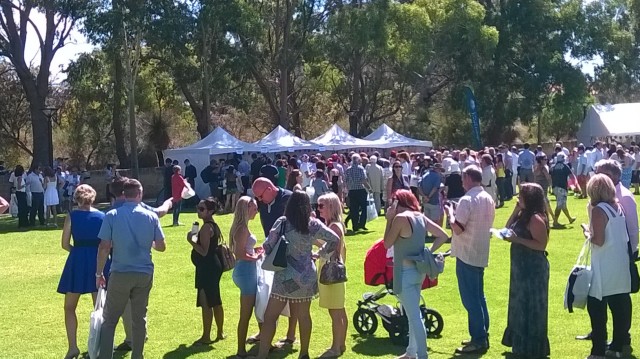 There was a big turnout of residents at the City of Joondalup’s Australia Day celebrations. 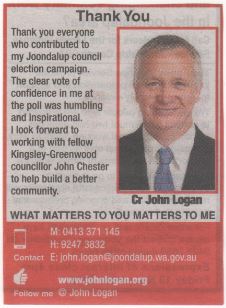 By now many of you will be aware that I will be standing for a seat on the Joondalup council at the October local government elections. An active member of the community through the local residents association, schools, sports, charities and an environment group, I have been door-knocking to introduce myself to fellow Joondalup South East Ward residents. What matters to you matters to me.